Researcher Paal Skjetne is standing in his office with a marker in his hand.

“Imagine that it’s Saturday and you’re sitting with your bottle of wine all ready on the table,” he says. The dark red liquid sits still inside the bottle. You take out the cork and pour the wine into a waiting glass.

Then he takes a brief dramatic pause before waving his hands energetically.

“As the wine flows into the glass, the surface takes on a waveform. It ripples and folds – and droplets are torn away!” The vessel in the picture is installed with spherical tanks and have fewer problems with sloshing than other vessels.
Photo: Helge Hansen/Statoil

“Wow. I have to admit I never looked at it that way.”

“Air is entrained and the interfaces become very complex.”

Skjetne sketches some wave-like surfaces on the whiteboard, takes one step back and looks at his drawing.

“This is where the challenge is,” he says, pointing. “These so-called ‘free surfaces’ are very difficult to model with our current simulation tools. And the same goes for how the glass and its geometry interact with the fluid.”

Skjetne sits down, clasps his hands together and smiles at me from across his desk.

It is difficult to imagine that pouring a glass of wine can be used to illustrate major industrial challenges. But this seemingly simple problem has become a legendary challenge among researchers across the world, as they seek to understand the mutual influence that solids and liquids have on each other at the precise moment they meet.

”A large LNG tanker may have as many as five big tanks each measuring 30 x 40 metres, carrying a total of 250 000 cubic metres of gas. This is no place for an accident.”

Companies are looking for improved tools that can simulate how breaking waves at sea affect installations and vessels so that they can build safer installations and optimize e.g. vessel bow design. Designers of LNG vessels are faced with the challenge of estimating loads inside LNG tanks due to sloshing of the liquefied natural gas as the ship moves in response to ocean waves. In the aquaculture industry, equipment suppliers want to know what forces fish cages exposed to powerful sea currents can withstand. And the construction companies wants to know the exact time at which water-saturated earth walls will collapse.

Industry in general needs to understand how these forces interact, and expects SINTEF to come up with the models that will help.

It started with a galaxy

The very first numerical experiments in the field now known as “Smoothed Particle Hydrodynamics” (SPH) were conducted back in the 1970s. At that time researchers wanted to model how stellar nebulae were formed.

“Since this process was very similar to gas cloud dispersion or the collision of two water droplets, people came to realize that the method might also be applied to fluid flow and later to solid mechanics,” says Skjetne.

Simulation of sloshing/wave movements in a tank. The fluid is held back using a barrier erected at one end of the tank. The barrier is quickly removed and the wave slams against the opposite wall.
Visualization by SINTEF ICT

Today SPH is a well-established method used by specialized university research groups, and a large number of doctoral theses on the method have been published. The challenge is that it is difficult to synthesize these in such a way that the material can be employed by different disciplines.

In 2005, researchers at SINTEF Materials and Chemistry began to look into the issue. Paal Skjetne had recently completed a development project with SINTEF ICT researchers on a particle code. Together with fellow researcher Alexandre Lavrov at SINTEF Petroleum Research they were also looking for new ways to model fracking of oil wells and to study loss of drilling mud. SPH emerged as an important part of the pieces in the puzzle.

In June 2005, SINTEF, NTNU and the research organization CSIRO arranged an international conference on the numerical modelling of flow phenomena. One research team gave a presentation that really caught the Norwegians’ attention.

“These guys were working with SPH applications in industrial processes and what they were able to demonstrate was so exciting that we immediately suggested that we should work together,” says Skjetne. “Soon afterwards we received an offer to purchase their source code.”

However, the researchers’ happiness was short-lived, since after a while it became clear that there were too many restrictions on what SINTEF could use the code for. So the negotiations came to an end.

“We had spent a little over a year trying to get an agreement signed, and had to go back to square one,” Skjetne said. “We were a little deflated at first, but we had gained momentum and decided to do it ourselves – starting from scratch!” 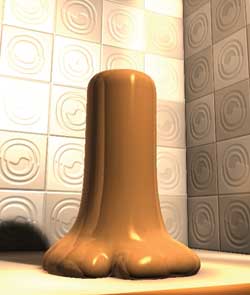 A simulated collision between a copper projectile and a wall. Industry employs simulations such as this in order to understand how materials behave when they are exposed to rapid deformation.
Visualization by SINTEF ICT

Today, two years later, work is underway. The calculation of challenging flow phenomena has become a priority research area for the SINTEF group, with a budget of NOK 18 million.

Thirteen employees from six different technical divisions at SINTEF are looking into topics as varied as sloshing in tanks, fracturing in materials, effect of waves and currents on fish farm cages, and the structural weakening of dams. Assembling a distributed cross disciplinary team is challenging so the work is organized into concentrated “sprints”. The team assembles five times a year for week long sprints. Mobile phones are banned. Tasks are defined beforehand. Moreover, full-day meetings are held every fortnight, and electronic communication channels are buzzing all the time.

“Everyone brings their various application areas and expertise to the table,” says Skjetne. “Common topics include free surfaces flows, phenomena with large material deformations, many of the applications we are targeting lie at the junction between natural phenomena and engineering science.”

The group’s aim is to construct a generic modular framework that can be customized for specific industry-oriented applications.

“But we’re not alone. There are major teams in France, the USA, Australia and China working with a variety of computation tools. How can a small Norwegian group become a global leader?”

“Our advantage lies in the triad formed by SINTEF, NTNU and Norwegian industry,” Skjetne answers. “It is unusual for a broadbased research community such as SINTEF to be so closely linked to both industry and academia. While we work together every day to find solutions to the challenges faced by industrial companies, large numbers of NTNU graduates ensure that new research results are released to industry every year. In this way, research and industry go hand in hand.”

If a material is deformed in only a minor way, or if the fluid surface is not too complex, established approaches such as CFD and FEM can calculate fluid and materials phenomena. In these situations, researchers employ a computation grid in which they set up detailed conservation equations or “budgets” that simulate what is flowing in and out of all the grid cells.

“But when the degree of deformation becomes too great, or the free surfaces too complex, the traditional computational methods take proportionately far too long – and can be inaccurate,” explains the Hungarian born researcher Csaba Pakozdi at Marintek.

“SPH allows us to separate the fluid into ‘particles’, each with a given mass and volume,” he says. “The particles move freely, but under the constraints of rules determined by local pressure and density variations within the fluid.”

SCRUM is a step-wise method designed to solve complex problems, in which a goal is defined and then broken down into subsidiary goals. These subsidiary goals are owned by “arbitrators” who assume responsibility for ensuring that continuous small advances are made as the calculations proceed. How does this work? What is the very smallest step that can be taken towards achieving the goal? Was it good? Each step is checked often enough to ensure that major deficiencies are identified. Adaptive measures must be taken as quickly as possible in order to ensure that the consequences are minimized. It is always all about splitting up tasks and taking small steps. The method demands physical collaboration, and loyalty and focus from all team members. They have to trust each other. Predefined tasks are prepared beforehand.

Researchers at Marintek are working with waves breaking against vessel structures (slamming) and wave phenomena in onboard tanks (sloshing). Pakozdi compares the first with what happens when you hit a water surface with your palm.

“If you lower your hand slowly, you feel almost no pressure, but if you slam it down hard it even hurts a bit,” he says.

“During the transport of LNG in onboard tanks, certain vessel movements may cause the fluid in the tanks to slosh about, and the pressure exerted by the waves may become so great that it can damage the insulating membrane in the tank wall. We call this phenomenon sloshing. If the tanks were always full this wouldn’t be much of a problem, but the combination of evaporation and unloading at various ports half empties the tanks and makes sloshing hazardous.”

Pakozdi shows me a photo of a tank. It has a lot in common with a thermos flask – steel on the outside, plywood and foam in the centre, and a thin, innermost steel membrane. A large LNG tanker may have as many as five large tanks, each measuring 30 x 40 metres and carrying a total of 250 000 cubic metres of gas. This is no place for an accident.

Marintek has established a “slosh rig”, consisting of a water chamber measuring 1 x 1 metre, mounted inside a 3 x 3 metre frame. Eight motors enable the rig to be rotated in any direction, allowing the researchers to observe the movement of the water inside the little chamber.

“The LNG tanks make up perhaps 20 per cent of the total length of a vessel,” Pakozdi says. “Imagine the main hull of the ship just over here,” he says, pointing to the left-hand side of the room. “And then here,” he says, pointing in the opposite direction. “That gives you some idea. We want to see what kinds of forces sloshing generates, build them into a dynamic model, and then do some number crunching. For example, will it take 25 or 100 years before the material ruptures?”

Back to the wine

Pakozdi shows a video animation of the sloshing phenomenon. We sit in rapt attention as time and again the fluid first encounters one wall of the tank and then washes back.

It reminds me of something, and later on the phone to Paal Skjetne I simply have to ask. “Can this movement in any way be compared to the wine in a wine glass?” I ask. “Is it theoretically possible to break a wine glass with too much force from a ‘wine wave?’”

“Yes, in theory,” Skjetne admits. “But I’d like to see the waiter who could manage that!”