A fjord's eye view of what is probably the most monitored mountainside in all of Norway. Photo: Frode Inge Helland/Wikipedia

Åknes in western Norway is perhaps the most studied mountain in the world. It is lifesaving research – literally. Åknes is a beautiful mountain near the famous Geiranger Fjord. But a kind of troll lives inside the mountain: a system of deep cracks that are expanding, slowly but surely. The largest of the cracks is called Åknesremna, and is about 600 metres long, winding its way down from a point about 900 metres above the fjord. The crack expands about three centimetres each year, and it isn’t the only part of the mountain in motion.

The worst-case scenario is that 50-60 million cubic metres of unstable landmass could crash into the fjord, creating a tsunami wave that would reach the village of Hellesylt within five minutes, at a height of 85 metres. After ten minutes, the tsunami could be at the popular tourist town of Geiranger, and six minutes in the other direction would take it to the industrial town of Stranda. It would, in short, destroy most of the small communities along the fjord, and do some damage all the way out to the coast.

It isn’t even a question of if, but when. This could happen in fifty years – or five hundred. The only thing we can do is to make sure that the inhabitants are well informed and can be evacuated in time.

Since 2005, researchers from a number of different disciplines have been studying Åknes. The team is drawn from the Norwegian Geotechnical Institute (NGi), the Geological Survey of Norway (NGU), NTNU, SINTEF, the University of Oslo, and Norsar, an independent geo-scientific research foundation. Several international universities are also involved.

At SINTEF’s wave simulation lab, researchers have made a model of the tsunami, to simulate how it would behave in the fjord, based on stability estimates from NTNU, and flood wave calculations from NGI.

Åknes/Tafjord Beredskap is a company that is based in Stranda and is responsible for monitoring the unstable area. It uses use an advanced, wireless monitoring system that makes it possible to alert the area’s inhabitants days, maybe even weeks, before a slide. 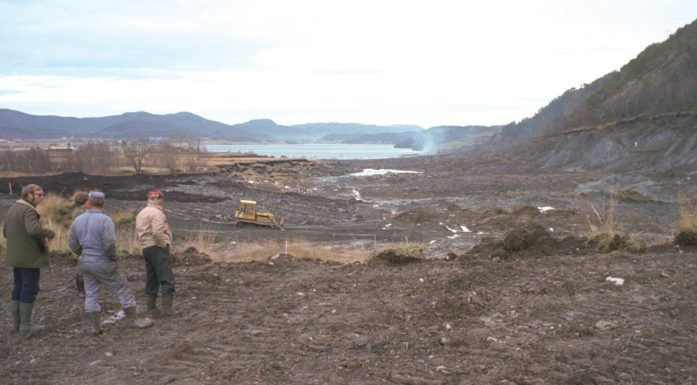 Research on minerals and materials is important in helping society make the transition to a greener economy. NTNU, the Geological Survey of Norway and SINTEF have joined forces to establish a national laboratory to that end.