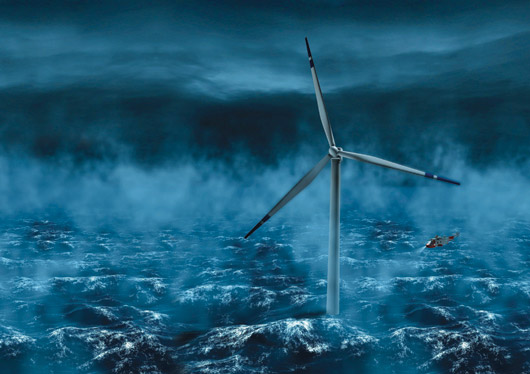 Researchers the world over are working to improve the design and technological solutions for wind turbines. Wind turbines need to be strong enough to withstand storms and waves for 25 years, and cheap enough to replace as much fossil fuel as possible from coal, oil and gas. Illustration: Solberg Production/StatoilHydro

WIND POWER: The world needs more green energy from the sun and wind.

Attaining the goal of limiting global warming to two degrees, as described by the IPCC, will require building more renewable energy.

Wind turbines can be placed on land or at sea. Offshore turbines have the advantage of fewer conflicts with local residents, less impact on the landscape and fewer birds— like eagles—that die due to collisions with the rotor blades. The wind at sea is also stronger and more stable.

Building to tolerate 25 years of storms and waves

In other words, there are many reasons to build wind turbines out at sea. And that is precisely what is happening many places in the world. Large wind farms now dot the coasts of Denmark, England, Germany and the Netherlands. The world’s first offshore wind farm was installed 24 years ago in Denmark.

Researchers worldwide are working to improve design and technological solutions for wind turbines. Wind turbines need to be strong enough to withstand storms and waves for 25 years, and cheap enough to replace as much fossil fuel as possible from coal, oil and gas.

“Right now, it costs about twice as much to extract energy from offshore wind as onshore. But the price for renewable energy shouldn’t only be evaluated based on commercial principles. We should also be taking into account the costs associated with global warming,” says Professor Gudmund Eiksund at NTNU.

Norwegian engineers have acquired a lot of knowledge about construction at sea over 40 years of oil and gas development. Much of this knowledge is directly transferable to the development of wind energy, but new knowledge is also needed.

The oil industry is very profitable compared with other industries. The investment costs to build an oil field can be recouped after three to four years, so the oil industry can afford expensive solutions. An offshore wind farm recoups costs—at best—only after 20-25 years, and thus profitability may be too low to transfer costly solutions from the oil and gas industry directly to renewable energy.

Professor Eiksund currently has six PhD candidates at NTNU’s Department of Civil and Transport Engineering who are working on various issues related to foundation engineering for offshore wind turbines.

“Today’s offshore wind turbines are modelled on wind turbines on land, but their foundations are based on principles developed for the offshore oil and gas industry,” says Eiksund.

Most wind turbines are currently set on monopiles, large steel tubes that are hammered 25-35 metres into the seabed. Reducing the length of the steel pipe would generate huge cost savings, and many research groups are working to accomplish this. Knowing what the seabed is like is crucial.

The strength of the seabed material can vary considerably, according to Eiksund. In areas that are appropriate for development, the seabed could consist of soft to firm clay, loose to firm sand or limestone that ranges from brittle chalk to hard rock. An offshore wind farm typically consists of 50 to 100 turbines and can cover ​​30-50 km2, with 500 metres between each turbine, he says.

A site investigation report often comes to several thousand pages. This type of information is usually only available for the construction project engineers, and thus not accessible for use in university research.

"It’s important to reuse and adapt the expertise built up during the 'oil age' in the development of sustainable energy," says Olav Bjarte Fosso, professor and director of the strategic research area NTNU Energy. He believes there is potential for the reuse of expertise in many areas.

"Assessing seabed conditions is important in this context. The cost of offshore wind turbines needs to fall for the energy to be competitive. Truer pricing of environmental costs will also help make renewable energy competitive," Fosso says.

Can be used for better design

Through cooperation with the Norwegian energy companies Statoil and Statkraft, Eiksund’s team has gained access to data from the site investigation for the Sheringham Shoal offshore wind farm, located approximately 20 km out at sea north of Norwich, England. A summary of the site investigation was published in the journal Engineering Geology. This knowledge is now more accessible than before, and can be actively used to design new wind turbines.

Worldwide, fixed-bottom wind turbines are built on relatively flat seabeds to a depth of approximately 35 metres.

Few areas along the Norwegian coast have such conditions, and the Norwegian shelf is poorly suited to fixed-bottom turbines. One of the most promising areas is south of Lista in Vest-Agder county, according to Eiksund.

The Norwegian continental shelf, however, has great potential for developing wind energy, with plenty of wind. The sea depth and ocean floor conditions make floating wind turbines most feasible here.

“In a number of countries, there is political support for developing offshore wind projects. As an oil nation with abundantt knowledge of construction at sea, Norway should know about establishing wave power devices and offshore wind turbines. We have to become so proficient that we can sell this knowledge to other countries that want to build,” Eiksund says.

John Olav Giæver Tande, the director of NOWITECH and research manager for SINTEF Energy Research, notes that the market and technology for offshore wind power are only in their start-up phase and have great potential for cost reductions.

Tande believes that Norway can contribute greatly to the goal of halving the kWh cost of new offshore wind farms by 2030.