Di Sabatino's lab has been the source of many academic publications and produced many PhDs. She is shown here to the far right with Cecilie Esser, Krzysztof Adamczyk (back), Kai Erik Ekstrøm (back) and Antoine Autruffe. Photo: Per Henning, NTNU

The solar cell industry is headed into clean-room labs to better understand and improve the materials that they are working with.

Ninety per cent of the world’s solar cells are made of silicon.

“This is the way it will be for the foreseeable future,” says Marisa Di Sabatino, an associate professor at NTNU’s Department of Materials Science and Engineering, and a scientific adviser for SINTEF Materials and Chemistry.

Through her research on silicon, Di Sabatino and her colleagues are helping companies that produce solar cells to better understand the material. There is still a lot to be learned before silicon-based solar cells reach their full potential.

A standard solar panel is made up of 60 solar cells in a glass or aluminium frame. When the sun shines on a panel of this type, between 16 and 20 per cent of the solar power is converted into useful energy.

The theoretical limit for the efficiency of a solar cell of this type, however, is about 30 per cent. 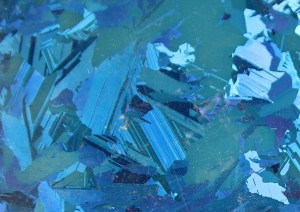 A slice of crystallized silicon. This plate is coated in a layer of silicon nitride about 75nm (0.000075mm) thick, which gives it a blue tint. The silicon nitride works as an anti-reflective coating. Photo: Per Henning/NTNU

Among the companies that use NTNU’s labs are Elkem Solar, Norsun and the Quartz Corporation.

The lab also works with the Massachusetts Institute of Technology (MIT) as well as other institutes in Japan, France, and worldwide.

International cooperation is another one of the reasons why this research is so important.

Di Sabatino has become an expert in analysing silicon. She mainly works in two areas, crystallization of silicon and chemical analysis using spectrometry.

Two rooms in the department’s building in Trondheim contain several large machines. You are not allowed into these rooms without protective gear, because these are the clean room labs. Almost no one is allowed into the cleanest room at all. Silicon is created with a process that uses quartz and carbon. The silicon that is the product of this reaction, however, is not pure enough to be used in solar cells, and needs to be processed further to be used.

New research shows that tomorrow’s solar cells may be able to make use of impure silicon. But this still means having eliminated a few nines behind the decimal point, as the silicon still needs to be about 99.9999 per cent pure to be of use. So that is where the clean rooms come in. With precision work like this, you can’t go stomping about the labs, grabbing whatever you please.

Here, researchers can form bars of crystallized silicon in five sizes, from 90 grams to 250 kilograms. These bars are then sawed into tiny slices, called wafers, that are about 0.2 millimetres thick.

Add small amounts of a few other substances, and cover in a reflective coating, and you have the basis for a contemporary solar cell.

Some of these slices are also analysed, so that we can learn more about the material, and better methods for producing more efficient solar cells can be found.

Research is being done specifically on the casting process of the silicon bars, to try to find and eliminate defects in the structure and the material. The goal is always to make the most use out of energy from the sun.

“This is a unique lab in Norway,” says Di Sabatino.

Here, researchers can carry out two types of spectrometry. No other labs in Norway have the capability to do both. (See fact box)

One method of spectrometry (GMDS) can measure impurities in material down to one part per billion, which is an order of magnitude similar to a grain of salt in a swimming pool. Marisa Di Sabatino has recently been involved in a project to find the limit for how small impurities in silicon we can find using this method.

The other method (GDOES) is used to check how the chemical composition of a material changes along its length. In this case, the material is analysed down to nano-level. This is precision work. (1 nanometre is a millionth of a millimetre.)

To analyse a substance using spectrometry, argon plasma is heated on the surface of a sample. This plasma is charged, and when heated, causes atoms in the sample to escape from the surface. These escaped atoms are in a gaseous, excited state, and will emit light of a very specific wavelength that is a sort of fingerprint for each individual element. Detecting these wavelengths allows researchers to see exactly what elements are contained in a sample. Difficult? Not for these guys.

The work that Marisa Di Sabatino is doing has been published in five articles in 2014 as of the end of November. The department takes about 15 PhD students every year.