The athletic lifestyle of wading birds, like the curlew sandpiper (Calidris ferruginea) pictured, leads to a lot of yo-yo dieting, where they lose and gain weight over and over again. This characteristic makes the birds interesting to researchers who are studying the effects of toxic chemicals. Photo: Shutterstock, NTB

Shorebirds burn a lot of fat during their long migrations. This can release toxic chemicals that accumulate in fat cells.

Imagine that you weigh twice as much as you do now, and that half of your body weight consists of fat. In this condition, you have to cycle for eleven days without stopping once to rest, drink or eat.

After the strenuous trip, you need to ensure you look your best, because as soon as you arrive, you have to mate. The clock is ticking – after eight weeks you have to ride all the way home again.

This describes the life of a shorebird, the champion of migratory birds. Shorebirds are famous for their extraordinary migrations. Some species travel more than 10 000 kilometres in one stretch to reach their breeding grounds. This ruddy turnstone (Arenaria interpres) breeds up north, but may live in southern Africa most of the year. Photo: Shutterstock, NTB

During their migration, shorebirds outperform the endurance of cyclists in the Tour de France, which spans 3 500 kilometres over 21 days.

In addition to flying long distances, shorebirds also need to be ready to mate and lay eggs as soon as they reach their nesting sites in the north, sometimes in Arctic regions. To do this, they eat aquatic invertebrates, molluscs, insects and small fish before starting their journey. A lot of them eat so much that they double their body weight.

As soon as the birds cannot gain any more weight, the organs they use to eat and digest food shrink, and instead their pectoral muscles and heart grow to maximize their ability to fly.

For shorebirds, fat is the most important source of energy during migration. Fat is an excellent nutrient: it contains twice as many calories as carbohydrates and proteins, making it the nutrient with the highest energy density.

“Nowadays, it’s possible to track chemicals in concentrations equivalent to one drop of water in an Olympic swimming pool.”

Fat cells are specialized in energy storage, continuously hoarding fats, vitamins, and hormones because “you never know when it might come in handy.”

Can these toxic chemicals harm migratory shorebirds? Researchers are trying to find out in the COAST IMPACT project.

The dose makes the poison

Toxicology is the study of the negative effects of chemicals on living things. The classic toxicology maxim “the dose makes the poison” dates back centuries, to times when arsenic and plant poisons were the main toxic chemicals one needed to worry about. Paracelsus, sometimes called the “father of toxicology,” is said to have coined the adage that “the dose makes the poison.” Maybe not quite right, but still. Illustration: Shutterstock, NTB

It’s difficult to determine how toxic a particular chemical is. The toxic effects depend not only on the dose, but also on how the substance enters the body, how often you are exposed to it and whether you ingest one large dose or several small doses.

We often need long-term studies to identify effects that occur gradually, such as lung cancer or deformations in babies.

Since humans learned to make new chemicals in laboratories, the number of man-made chemicals in the environment has increased exponentially. As a result, all organisms are exposed to a mix of many different chemicals every day. This mix changes constantly, and when several chemicals occur at the same time, even small doses can be harmful.

Figuring out how all the possible combinations of chemicals affect the health of different organisms is a challenging task. Fortunately, modern laboratory techniques and improved computer models can help us understand the effects of chemical cocktails.

Nowadays, it is possible to measure chemicals in concentrations equivalent to one drop of water in an Olympic swimming pool. In addition, we can measure small changes in molecules in our bodies that may indicate damage.

One group of such molecules are microRNAs. These are small RNA molecules found in all our cells. They act as a kind of control mechanism that ensures that protein production in the cells goes smoothly, by preventing messenger RNA from being converted into proteins. Not surprisingly, important cellular processes can go wrong if this control mechanism fails. This turns out to be the case in several human diseases, including cancer. These tiny RNA molecules can also help us understand how toxic chemicals affect cells and damage the immune system.

The athletic lifestyle of shorebirds includes a lot of yo-yo dieting, where they lose and gain weight over and over again. This makes the birds interesting for scientists who study the effects of toxic chemicals.

The number of shorebirds is declining rapidly in several locations – a classic example of the canary in the coal mine. Miners used to bring canaries into the coal mines to detect toxic gases. When the birds became restless, it was time for the workers to get out.

Shorebirds play an important role in food webs, and it has been suggested that they are important for mudflat ecosystems that counteract erosion, contribute to nutrient cycling and bind carbon.

Shorebirds can also be carriers of avian influenza virus, which poses a serious problem for farmers who breed domestic birds, and the virus has the potential to mutate and infect humans.

Can toxic chemicals weaken the shorebirds’ immune system and increase the spread of such viruses as a result of their long migration routes? Researchers hope to find the answers to this and other questions.

This blog was first published by NTNU TekNat on 26 July 2021. The original page includes a comprehensive list of sources. 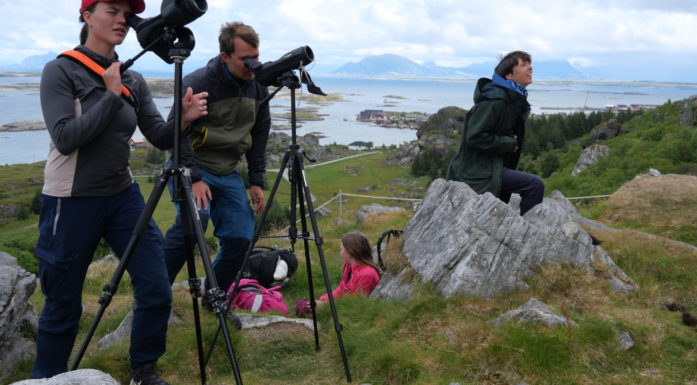 Barnacle geese in the Arctic have been on a diet. So many now migrate to northern breeding grounds that in some places there’s less food to go around. The good news is that it doesn’t seem to restrict their population growth — yet.